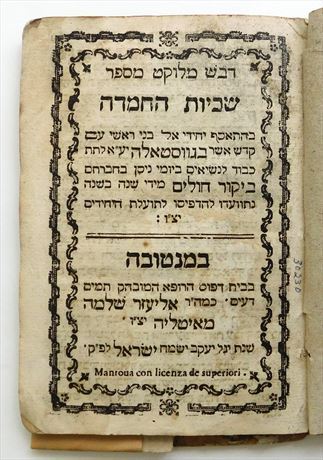 Attractive edition of the prayers and readings for Rosh Hodesh Nissin to Pesah, according, reputedly according to Hemdat Yammim. The title is from “And upon all the ships of Tarshish, and upon all] delightful craftsmanship (Sekhivot ha-Hemdah)” (Isaiah 2:16). The title-page states that it is honey from Sekhivot ha-Hemdah when the individuals gather to the heads of the holy people בגווסטאלה to give honor to the princes in the days of Nissin of the members of the Bikur Holim Society, from year to year. The text begins with readings for erev Rosh Hodesh Nissin, followed by Rosh Hodesh Nissin, and days of the week through the thirteenth.

Although no author is given, the larger work from which this edition is taken, was written by R. David ben Samuel Pardo (1718–1790) a rabbinical author and poet. Born in Venice, he went to Sarajevo for a time as a result of a dispute over an inheritance, and from there to Spalato, in Dalmatia. From approximately 1738 he was a teacher of children, at the same time studying under the local rabbi, R. Abraham David Papo. Eventually R. Pardo was appointed rabbi of the town. From 1760 he was rabbi of Sarajevo. From 1776 to 1782 he traveled to Ereẓ Israel, settling in Jerusalem where he served as head of the yeshivah Ḥesed le-Avraham u-Vinyan Shelomo. Pardo was regarded as one of Jerusalem's great rabbis. Of his many works his series of commentaries and novellae on tannaitic literature are especially original. His first work was Shoshannim le-David (Venice, 1752), a commentary on the Mishnah. The somewhat sharp language he employed in the first part in criticizing contemporary scholars gave rise to friction between him and David Corinaldi and Mas'ud Rokeah in Leghorn. But after he mitigated his language in the second part and published an apology, a reconciliation took place.