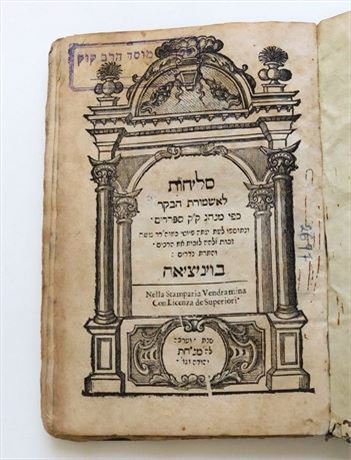 Selihhot according to the custom of the of the Sephardic community with pizmonim (liturgical verse) by R. Moses ben Mordecai Zacuto and with Hattarat Nedarim printed with great care by Gad ben Isaac Foa. The title page as an attractive floral frame and there are woodcut tail-pieces at the end of the selihot prior to the pizmonim and at the end of the volume. The title page is dated “And from the wilderness they went to Mattanah מתנה (495 = 1735)” (Numbers 21:18). The selihot begin form Rosh Hodesh Elul, consistent with the Sephardic custom. The text of the selihot is in large vocalized letters. The pizmonim of R. Zacuto begin are from 51a through 66b. Next is Hattarat Nedarim.

R. Moses ben Mordecai Zacuto, (c. 1620–1697) was a renowned kabbalist and poet. Zacuto, who was born into a Portuguese Marrano family in Amsterdam, studied Jewish subjects under R. Saul Levi Morteira and also studied secular subjects. According to tradition, he later fasted 40 days "in order to forget the Latin language." He was a student in the bet midrash of Amsterdam and in his youth traveled to Poland to study in the yeshivot there. R. Zacuto was attracted by Kabbalah and refers in his letters to his teacher R. Elhanan, perhaps "Elhanan the kabbalist," who died in Vienna in 1651. He moved to Italy, remaining for some time in Verona. From 1645 he lived in Venice and served for a time as a preacher under R. Azariah Figo. Afterward, he became one of the rabbis of the city and a member of the Venetian yeshivah. Between 1649 and 1670 he was proofreader of many books printed in Venice, especially works on Kabbalah. He edited the Zohar Hadash in 1658, and also wrote many poems for celebrations and special occasions. Zacuto tried to acquire the manuscripts of the Safed kabbalists, especially those of R. Moses Cordovero and the different versions of the works of R. Hayyim Vital. He befriended the kabbalist R. Nathan Shapiro of Jerusalem and the old kabbalist R. Benjamin ha-Levi, who served as an emissary from Safed in Venice for two years (1658–59). In 1671 he was invited to serve as rabbi in Mantua, but he did not go until 1673, remaining there until his death. He enjoyed great authority as the chief of the contemporary Italian kabbalists and corresponded with kabbalists in many places. He never realized his desire to settle in Erez Israel.

R. Zacuto's published exoteric works include his commentary on the Mishnah, Kol ha-Re-Me-Z; he was known throughout his life as Re-Me-Z, from his initials (Rabbi Moses Zacuto). Part of the work was published in Amsterdam in 1719. R. H. J. D. Azulai (Hida), in his Shem ha-Gedolim, noted that the manuscript was twice as long as the printed edition. A collection of halakhic responsa was published in Venice in 1760. A commentary on the Palestinian Talmud is lost. His major activity, however, was in Kabbalah. R. Zacuto opposed the mingling of the kabbalistic system of R. Cordovero with that of R. Isaac Luria which was then current in some circles (Tishby, in Zion, 22 (1957), 30) and for this reason he criticized Solomon Rocca's Sefer Kavvanat Shelomo (Venice, 1670) even though he composed a poem honoring the author. He went over the entire corpus of R. Luria's and R. Vital's writings and added many annotations under the name Kol ha-Re-Me-Z or the abbreviation Ma-Za-La-N (Moshe Zakkut Li Nireh - "It seems to me, Moses Zacuto"). Many of them are collected in the books Mekom Binah and Sha'arei Binah of Isaac Sabba (Salonika, 1812–13) and they have partly also appeared in different editions of the works of R. Vital and R. Jacob Zemah. R. Zacuto wrote at least two commentaries on the Zohar. In the first, he continued Yode’ei Binah begun by his contemporary R. Joseph Hamiz (up to Zohar I, 39). Here, R. Zacuto used many commentaries from the school of R. Cordovero, the commentary Ketem Paz by R. Simeon Labi and the first commentary of R. Hayyim Vital. The printed part contains the commentary up to Zohar I, 147b (Venice, 1663). For unknown reasons it was never circulated. One copy is extant in the library of the bet din in London, but there exist complete manuscripts (e.g., British Museum, Ms. Add. 27.054–27.057). Mikdash ha-Shem, his second commentary on the Zohar, was written for the most part according to the Lurianic Kabbalah, and was published in abridged form in the Mikdash Melekh of Shalom Buzaglo. The complete commentary is found in the Oxford manuscripts Opp. 511, 512, 513, 515, 516, 517. Mezakkeh ha-Rabbim (Oxford, Bodleian Library, Ms. Opp. 120) though ascribed to him was not written by him. A long kabbalistic responsum to the rabbis of Cracow on the copying of Torah scrolls, tefillin, and mezuzot was published several times, in Mekom Binah, in Kiray Sefer by R. Menahem Meiri (pt. 2, 1881, 100–8; separately, Berdichev, 1890). R. Zacuto arranged tikkunim ("special prayers") for several religious ceremonies according to Kabbalah. These were often reprinted and had great influence, especially on the religious life in Italy. They include Sefer ha-Tikkunim (a tikkun for the eve of Shavuot and Hoshana Rabba; Venice, 1659), Mishmeret ha-Hodesh (ibid., 1660), Tikkun Shovavim (the initials of the first six sections of Exodus), i.e., a tikkun for fasts undertaken in expiation for nocturnal ejaculations (ibid., 1673), and Tikkun Hazot (ibid., 1704). All these were arranged under the influence of R. Benjamin ha-Levi and R. Nathan Shapiro. A major part of R. Zacuto's poetry is devoted to kabbalistic subjects, such as his poems in the book Hen Kol Hadash (Amsterdam, 1712), in Tofteh Arukh (a description of hell; Venice, 1715).