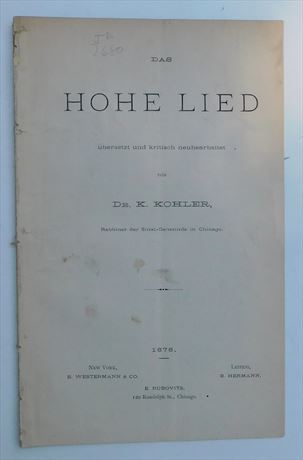 Commentary and translation of Shir ha-Shirim by Dr. Kaufmann Kohler (1843–1926), U.S. Reform rabbi and president of Hebrew Union College. Kaufmann Kohler was born in Fuerth, Bavaria, long known as a center of rabbinic learning, and was himself descended from rabbinic stock. He pursued rabbinical studies from an early age and in 1862 entered the gymnasium at Frankfurt. While in that city he came under the influence of R. Samson Raphael Hirsch, champion of Neo-Orthodoxy, and, though later diverging sharply from his viewpoint, never ceased to pay tribute to his influence. Kohler pursued his university studies at Berlin and Erlangen, receiving a doctorate in 1867. His university studies had shattered Kohler's Orthodoxy and his doctoral thesis, Der Segen Jacobs (1867), took such a radical viewpoint that no rabbinic position was open to him. For a time he continued his studies at Leipzig with a view to entering the academic world, but, warmly recommended by the German Reform leader Abraham Geiger, Kohler accepted the office of rabbi of Congregation Beth El, Detroit (1869). In 1871 he moved to Sinai Congregation, Chicago (where he introduced Sunday services in 1874), and in 1879 he succeeded his father-in-law, David Einhorn, at Temple Beth El, New York.

Kohler emerged as a national champion of Reform Judaism in 1885 when, replying to attacks by Alexander Kohut, he published a series of sermons entitled Backward or Forward (1885). The outcome was his convening of the Pittsburgh Conference of Reform Rabbis and its adoption of a radical program on the basis of Kohler's draft. In 1903 Kohler was appointed president of Hebrew Union College and set about immediately to improve the curriculum and to bring fresh talent to the faculty. His dealings were not always diplomatic, and he was soon involved in a clash with several members of the faculty on the subject of Zionism, which he opposed. He became the chief spokesman for classical Reform. His major theological work was Jewish Theology Systematically and Historically Considered (1918; repub. 1968), which traces Jewish thought from the perspective of 19th-century Reform Judaism. He revamped the curriculum, introduced biblical criticism and reduced the time spent on Talmud, but also held daily services and taught reverence through study. Under his presidency the College moved to a new, spacious setting. Upon his retirement, Kohler received the title of president emeritus (1921) and returned to New York.

Throughout his career Kohler showed wide scholarly interests and prodigious industry as a researcher and writer. When Studies in Jewish Literature Issued in Honor of Professor Kaufmann Kohler on the Occasion of his 70th Birthday was published in 1913, 801 of his articles were listed in the bibliography. He was editor of the department of philosophy and theology of the Jewish Encyclopedia, to which he contributed 300 articles, and a member of the board of editors of the JPS English translation of the Bible. His Studies, Addresses and Personal Papers (1931) was published posthumously.

Kohler was an active member of the Central Conference of American Rabbis and his learning and position enabled him to exercise a significant influence on the trend of American Reform Judaism in his day. He was an unusual combination of rationalist and believer. The evolutionary theory of Charles Darwin exercised an important influence on his thinking. Man, Kohler declared in 1874 "… is driven by the creative forces farther and farther away from his root, away from his natural origin, toward the higher, the infinite; away from the transient shell towards the eternal … everything that stamps man as man … our entire culture has grown from rude beginnings into ever higher perfection." With this he combined a strong belief that the task of the Jew was to lead the world to a universal religion and that the Messianic era was approaching in his own day.