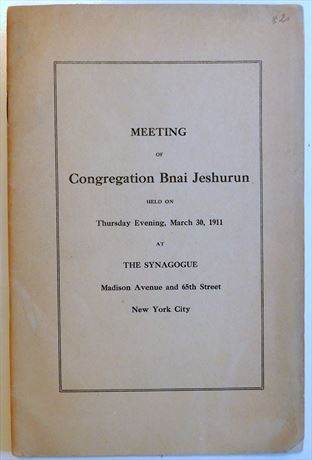 Title: Meeting of Congregation Bnai Jeshurun held on March 30,1911 at the Synagogue ...

Founded in 1825, Bnai Jeshurun was the second synagogue founded in New York and the third-oldest Ashkenazi synagogue in the United States. B'nai Jeshurun took a leading role in founding the Board of Directors of American Israelites in 1859. By 1874, there were divisions within the congregation over remaining strictly orthodox or adopting ideas from the Reform movement, and by 1875, it was in litigation, with the Reformed movement ultimately winning in court. The Board of Delegates affiliated with the Reform movement's Union of American Hebrew Congregations in 1878, but in 1884 it left. Two years later, it also supported the founding of the Jewish Theological Seminary of America (JTS) in 1886, a school formed to support Orthodoxy in combating the Reform movement.

In 1870, it worked with the other "conservative" (non-Reform) synagogues of the city to develop a uniform siddur. In 1889, the congregation published its own edition of the prayer book. When Solomon Schechter used JTS to create a more conservative set of reforms to traditional Judaism, B'nai Jeshurun joined his United Synagogue of America, now the United Synagogue of Conservative Judaism.

In the 1990s the congregation left the Conservative movement and is now independent.