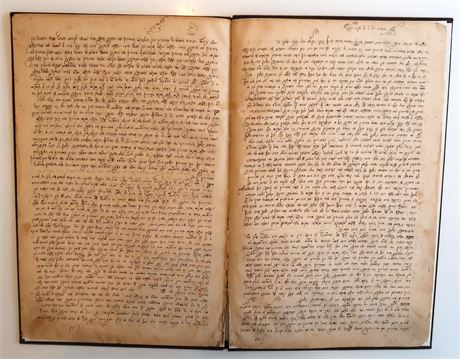 He received his early education under his grandfather, Joseph Emanuel ben Menachem Deutsch, who was district rabbi (Bezirksrabbiner) in Raudnitz, and then frequented the yeshivot of Prague and Pozsony (Pressburg, today Bratislava, Slovakia) being one of the favored disciples of the famous Moses Schreiber (the "Chatam Sofer").

He lived subsequently in Albertirsa, where he married, and after the death of his wife moved to Budapest, where he lectured on Talmud to a small society in a yeshiva. In 1846 he was called as rabbi to Sebes and in 1851 to Balassagyarmat, where he officiated till his death. In the era of the Reform movement, and the Hungarian Jewish Congress of 1868, Deutsch was one of the most uncompromising and most important leaders of Orthodoxy; and the legal recognition of the autonomy of the Orthodox congregations in Hungary was largely due to his efforts.

It is worth mentioning that on 24 April 1869, he lead the visiting delegation of Orthodox rabbis to the Emperor and King, Franz Joseph I in the Royal Palace of Buda, where Rabbi Ktav Sofer (son of the Chatam Sofer) of Pozsony (Bratislava), Rabbi Menachem Asch of Ungvár, Rabbi Menachem Katz of Deutschkreutz (Németkeresztúr, Burgenland, Austria) were also present.

He confessed a strict Orthodox ideology, and was in sympathy with the Chasidism, although he did not adopt all their tenets. As typical of his views may be quoted the facts that he declared it sinful to pray in a synagogue in which the bimah was not in the center, and that he prohibited the winding up and setting of an alarm-clock on Friday so that it should ring on Saturday.

Of his works a collection of responsa, under the title "Goren David" (David's Threshing-Floor), was published after his death by his sons (Paks, 1885). After his death, his son Joseph Israel (Yosef Yisroel) Deutsch followed him as Chief rabbi (av beit din) of Balassagyarmat. Pilgrims from far and wide visit his grave to the Jewish Cemetery of Balassagyarmat.