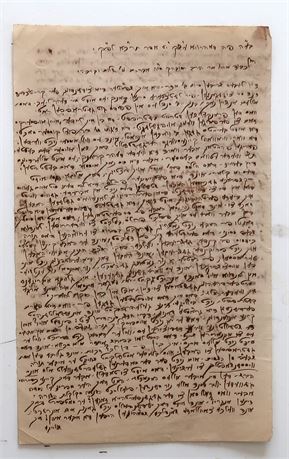 Long letter in Judeo-German by R. David b. Mordecai Deutsch to his brother R. Abraham Deutsch of Zülz discussing his trials and tribulations in his rabbinic affairs, family matters, and history of Silesian Jewry.

R. David Deutsch was German rabbi; born at Zülz, Silesia, 1810; died at Sohrau, Silesia, 1873. He was brought up by his relative R. Menahem Deutsch, at Breslau. He studied Talmud under R. Mordecai Benet at Nikolsburg from the age of 13, and under R. Moses Sofer at Presburg. R. Deutsch was called to the rabbinate of Myslowitz, Prussia, in 1838, and that of Sohrau in 1845. R. David Deutsch, like his older brother R. Israel Deutsch, was a champion of Orthodoxy, and led the protest against the nomination of Abraham Geiger as rabbi of Breslau. R. Deutsch contributed articles to most of the Jewish periodicals.

The following are his works: "Ḥabaḳḳuḳ Meturgam, u-Mebo'ar" (Habakkuk Translated and Explained), a German translation with notes (Breslau, 1837); "Rücksprache mit Allen Gläubigen des Rabbinischen Judenthums" (Breslau, 1843), a reply, written in collaboration with his brother Israel Deutsch, to Abraham Geiger's pamphlet "Ansprache an Meine Gemeinde"; "Asof Asefah" (The Gathering of an Assembly), a protest against the rabbinical conferences at Brunswick in 1844 and at Frankfort in 1845 (Breslau. 1846);"Die Orgel in der Synagoge," a refutation of the arguments of S. Löw in favor of the use of the organ in the synagogue; a German translation of Isaac Troki's "Ḥzzuḳ Emunah," with critical notes (Breslau, 1865). Deutsch's sermons had a felicitous combination of the older style with modern rhetoric, and some of those delivered on public occasions were published.