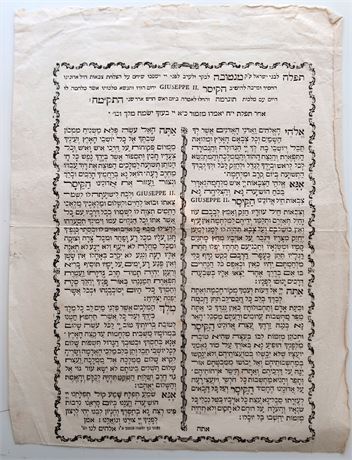 Rare - as these were hung in synagogues for daily use few survive.

The copy of the late bibliophile Isaac Mehlman with his notes in pencil.

Prayer service in Hebrew for the success of Giuseppe II in the war againt Turkey. Joseph II (Giuseppe II; Joseph Benedikt Anton Michael Adam; 1741 – 1790), Holy Roman Emperor from 1765 to 1790 and ruler of the Habsburg lands from 1780 to 1790. He was the eldest son of Empress Maria Theresa and her husband, Emperor Francis I, and was the brother of Marie Antoinette. He was thus the first ruler in the Austrian dominions of the House of Lorraine, styled Habsburg-Lorraine. Joseph was a proponent of enlightened absolutism; however, his commitment to modernizing reforms subsequently engendered significant opposition, which eventually culminated in an ultimate failure to fully implement his programmes. He has been ranked, with Catherine the Great of Russia and Frederick the Great of Prussia, as one of the three great Enlightenment monarchs. His policies are now known as Josephinism. He died with no sons and was succeeded by his younger brother, Leopold II.