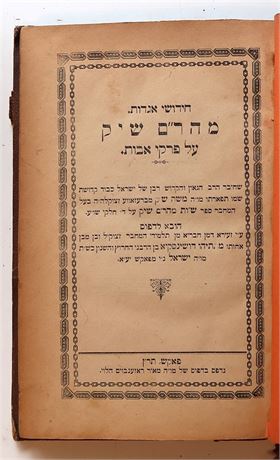 Aggadic novellae to Pirke Avot. The Maharam Shick, acronym of R. Moses b. Joseph Schick (1807–1879), Hungarian rabbi and posek. According to one tradition the name was chosen by the family following the law passed by the Austrian government making it obligatory for Jews to adopt surnames, and it was chosen as forming the initial letters of Shem Yisrael Kadosh ("the Jewish name is sacred"). R. Schick was born in Brezove in the Neutra (Nitra) district of Slovakia. He was orphaned when a child, and at the age of 11 went to study at the yeshiva of his uncle R. Isaac Frankel in Frauenkirchen. After three years he proceeded to the yeshiva of R. Moses Sofer in Pressburg, where he remained for six years. R. Sofer recommended him as a suitable incumbent for the vacant post at Vergin near Pressburg, and he served there about 24 years. In 1861 he agreed to accept the rabbinate of Hust, where he established a yeshiva and remained until his death. Among his many pupils special mention may be made of R. Zussman Sofer of Paks, R. Zalman Spitzer of Vienna, and R. Wolf Sofer of Budapest, who are frequently mentioned in his responsa. R. Schick fought against the Reform movement. Following the Braunschweig conference (1844) and the resolutions adopted there, he wrote in a responsum (YD 331) that the men assembled "are not rabbis but Karaites. They don the cloaks of rabbis in order to deceive and to act like the serpent. Some are not qualified in halakhah or as rabbis, but have become rabbis overnight." He protested especially against the resolution permitting mixed marriages. His call for a united front of Orthodox Jewry against the Reform movement was not accepted at that time. Following the publication in Hungary in 1867 of the law granting autonomy to the Jews and the demand of the Reformers to convene a congress to discuss the organization of the communities and education, Schick gave his full support to the plan to found an independent communal organization. In the Budapest congress of 1869, he fought for complete separation from the Reformers. In a lengthy responsum (OH 309) he details all the plans and proposals of the Reformers in order to justify his decision. Following the majority decision of the Austrian parliament in favor of the claims of the Orthodox community, the Landes-Organisations Statuten were formulated that were later confirmed in 1871. R. Schick in a responsum of 1872 encouraged the acceptance of these statutes and opposed the principle of preserving the status quo (OH 307, 310). When the controversy broke out between R. Samson Raphael Hirsch of Frankfort and R. Seligmann Baer Bamberger of Wuerzburg on whether to cooperate with the Reformers or form separatist congregations, R. Bamberger ruling that it was permitted to form one community with them, R. Schick protested in his responsum (OH 306), and under his influence R. Bamberger's view was rejected and Hirsch's opinion in favor of separation accepted. Despite all his vigorous opposition to Reform, R. Schick took a moderate stand in certain matters. Thus he resisted the demand of the Orthodox rabbis for a prohibition against preaching in the vernacular, stating that "in the case of a G-d-fearing man who we are certain is a talmudic scholar, and who preaches in the vernacular, and whose sole intention is to extend the border of our holy Torah... I find no reason to forbid him where the Congregation only wishes to listen in the vernacular, or if he does not do so they will appoint another who is unfit" (OH 70), and he refused to sign the takkanah of the rabbis which was adopted at the instigation of the R. Hillel Lichtenstein, "that it is forbidden to preach or to listen to a sermon in a non–Jewish tongue." His love for the old yishuv in Erez Israel is reflected in his polemic against Graetz's pamphlet Mikhtav Zikkaron ("Memorial Letter") which calumniated the organization of the old yishuv and protested especially against halukkah, the lack of schools, and the paucity of secular knowledge. R. Schick was a prolific respondent. Almost 1,000 of his responsa are extant: 345 on Orah Hayyim (Munkacz, 1880), 410 on Yoreh De'ah (1881), 155 on Evan ha-Ezer (Lemberg, 1884), and 62 on Hoshen Mishpat (ibid.). A new edition in two volumes was published in New York in 1961. He also published glosses to the Mitzvot ha-Shem (Pressburg, 1846) of R. Baruch b. Zevi Hirsch Heilprin and expositions and novellae on the 613 commandments, in two parts (Munkacz, 1895–98). The work on the 613 precepts was originally larger, but when R. Joseph Babad's Minhat Hinnukh (1869) was published first, Schick was distressed, saying that the latter had anticipated half his work, and as a result he abbreviated it. Also published were aggadic novellae on Avot (Paks, 1890); Maharam Schick, on the Pentateuch (Munkacz, 1905), and on Hullin (Satmar, undated); and Derashot (new edition 1968), including discourses given by him during the years 1839–72.