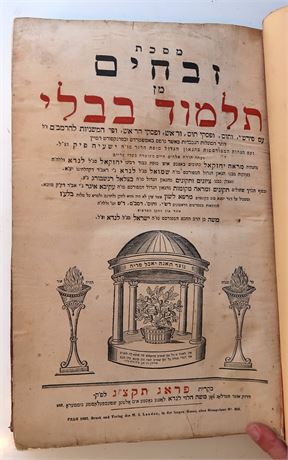 Initial title with several words in red ink, subsequent titles in all black ink. Each tractate with individual full title.

R. Ezekiel b. Judah Landau (1713-1793) halakhic authority of the 18th century, known as the Noda bi-Yhudah, after one of his works. R. Landau was born in Opatow, Poland, and received his talmudic education in Vladimir-Volinski and Brody. He was endowed with qualities which make him one of the most famous rabbis of the close of the classical Ashkenazi rabbinic era. He came from a wealthy and distinguished family tracing its descent back to Rashi. He had a commanding appearance and rare intellectual ability, was of strong character imbued with a love of truth and of his fellow men, and had considerable diplomatic skill. By nature he was an intellectual ascetic whose main interest lay in the study and teaching of Torah. In his time he was regarded as the prototype of the ideal Jew. At the age of 21 he was already dayyan of Brody, and at 30 rabbi of Yampol. From there he received a call in 1754 to become rabbi of Prague and the whole of Bohemia, one of the highest positions of that time. His famous proclamation of 1752, whose purpose was to put an end to the notorious Emden-Eybeschuetz controversy, which split the Jewish world into two, helped in no small measure in his obtaining this appointment. His tenure of the Prague rabbinate enabled Landau to give practical effect to his outstanding qualities. It afforded ample scope for his rabbinic and communal activity both in Prague itself and beyond. He acted as judge, teacher, and mentor of the community. In his capacity as rabbi of Bohemia, he represented the Jews before the Austrian government. In his great yeshivah, he taught hundreds of students, the cream of Jewish youth from Austria and surrounding countries.

R. Bezalel b. Joel Ronsburg (1760-1820) dayan and rosh ha-yeshiva in Prague. In accordance with the imperial decree of 1787 he adopted the name "Daniel Rosenbaum" but was later called Ranschburg, the Yiddish pronunciation of the town Ronsperg, the German name for Pobezovice where he was born. He attended yeshivot at Schwabach, Fuerth, and Prague, where he was a pupil of R. Leib Fischels and also studied under R. Ezekiel Landau. He never held an official appointment and was supported by his wife and her father, but acted as rosh yeshivah in Prague. R. Ranschburg fought Reform (Resp. Hatam Sofer). He devoted himself to commenting on those tractates of the Talmud on which there are few commentaries, such as his Horah Gever on Horayot (Prague, 1802) and Pithei Niddah (1957; published in Jerusalem 1928 under the title Hokhmat Bezalel). His Sedeh Zofim on R. Asher b. Jehiel's halakhot was appended to the Prague Talmud edition (1839–46). His Ma'aseh Rav (Prague, 1823) deals partly with tractate Nazir. Haggahot based on it are included in all subsequent editions of the Talmud. Many letters on halakhic subjects which he wrote to the censor Carolus Fischer (partly signed "Ilan Shoshan") are preserved in the Prague University Library (MGWJ, 62 (1918), 49–56).

R. Akiva b. Moses Guens Eger (Eiger) (1761–1837). He was born in Eisenstadt, and went to Breslau at an early age to study under his uncle, R. Benjamin Wolf Eger, and R. Hayyim Jonah Teomim-Fraenkel. In 1780, he went to live with his father-in-law in Lissa, where for about ten years he engaged in study, free from financial stress. Impoverished as a result of the losses suffered in the fire of 1791, he accepted a position as rabbi in Maerkisch-Friedland, where he established a yeshivah. As his reputation grew, his decisions were sought in many matters. The thought of reaping material benefit from the Torah was repugnant to him, and on several occasions he thought of leaving the rabbinate and devoting himself to teaching. In 1814 he was prevailed upon to accept the position of rabbi in Posen, which was offered to him over the objections of the maskilim and the followers of the Reform movement, who, fearing his great influence, sought the intervention of the secular authorities, on the grounds that he had no command of the German language and was opposed to all innovations. They were eventually obliged to accept R. Eger's appointment, but they nevertheless attempted to minimize his influence by the insertion of certain restrictive clauses in his letter of appointment. R. Eger, as unofficial chief rabbi of the Posen district, labored on behalf of his own and other Jewish communities. He established a large yeshiva, whose students included R. Zevi Hirsch Kalischer, R. Jacob Levy (author of the dictionaries of the Talmud), and Julius Fuerst. He waged a constant struggle against the Reform movement. He received a royal message of thanks from Frederick William III for his services during the cholera epidemic of 1831, during which he framed a number of helpful takkanot and cared for many of the sick. A number of welfare institutions established by him were in existence until World War II. He was the father-in-law of R. Moses Sofer and the ancestor of many prominent scholars. His son R. Solomon Eger was elected rabbi of Posen on his father's death. Many popular legends surrounded R. Akiva's person. His exemplary humanity and beneficence earned him universal admiration, even among his adversaries. His modesty was proverbial, and he was sternly opposed to the titles of honor common in rabbinical circles. Of his works, the following were published in his lifetime: Hilluka de-Rabbanan (1822); Haggahot to the Mishnah (1825–30); Gilyon ha-Shas, notes to the Prague edition of the Babylonian Talmud (1830–34), and later to the Vilna edition; responsa, together with decisions, etc. (1834). After his death there appeared: responsa, part 2 (1839); Hiddushei R. Akiva Eger (1858); Tosafot (1841–48 in the Altona edition of the Mishnah); Haggahot, glosses to the Shulhan Arukh (1859); responsa (1889); Kitvei R. Akiva Eger (letters; 1929). In addition many of his letters and responsa were printed in talmudic journals and in numerous other works. Much of his work has remained in manuscript and some has been lost (e.g., his glosses to the Palestinian Talmud).