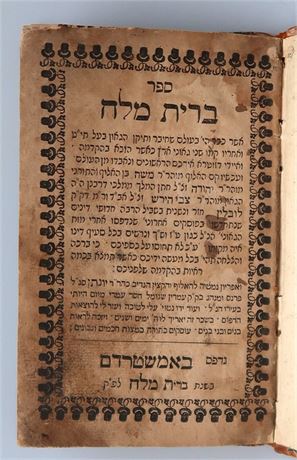 The Isaac Mehlman copy with his inscription on fly "יקר מציאות מאוד".

Work on the laws of salting and rinsing meat by R. Yom Tov Lipmann Heller (1579–1654), the present copt is the second edition of the work and the first Yiddisah edition. The body of the work is in Yiddish set in Vaybertaytsh, as it was written for less educated people and women, who would not be as familiar with Hebrew. This edition, however, has a Hebrew introduction (2a-11b) by R. Moses ben Judah, son-in-law of R. Zevi Hirsch of Lublin. R. Yom Tov Lipmann Heller is not referred to by name on the title page, but rather by his most important work, Tosefot Yom Tov (on Mishnayot).

Berit Melah is one of several Yiddish works written for the above purpose by R. Yom Tov Lipmann Heller, a Talmudic scholar of great repute, who also engaged in the study of Kabbalah, religious philosophy, and Hebrew grammar. He also acquired an extensive general knowledge, particularly of mathematics, astronomy, and natural sciences. He was educated in the home of his grandfather, R. Moses Wallerstein, as well as, among others, R. Judah Loew ben Bezalel (the Maharal) of Prague. In 1597, when only 18 years of age, he was appointed dayyan in Prague, and served in this office for 28 years, during which period he acquired renown for his profound knowledge and for his integrity. In 1625 he was appointed rabbi of Nikolsburg (Moravia) but in that same year moved to Vienna where he was elected av bet din. In 1627 he returned to Prague. R. Heller was imprisoned on June 25, 1629 due to slander by enemies to the emperor Ferdinand II, accusing him of contempt of the state and of insulting Christianity. Through the efforts of the Jews of Prague the other heavy penalties imposed were partly reduced. After spending 40 days in prison he returned to Prague in August 1629. He subsequently served as rabbi in a number of important communities, among them Cracow.